Most jazz guitarists routinely employ arpeggios and melodic cells in their soloing, as they really help to outline chord changes accurately. Having said that, some players don’t fully explore arpeggio note combinations and instead keep playing the same sequence (order) of arpeggio notes when they improvise. For a long time, this was very true of my own playing until I began working on some different note combinations.

In this lesson I’m going to suggest an approach to arpeggio note combinations (the four note melodic cells) that I have found very helpful in my own practice.

As you’ll likely know, the majority of jazz standards employ seventh chords of one form or another in their harmonic structure. In arpeggio terms, this gives us at least four arpeggio notes to work with if we play the root, third, fifth and seventh degree of each arpeggio.

Whilst this is undoubtedly a valuable practice routine, it does sound very much like an exercise and is only scratching the surface of what is possible with four note arpeggio combinations.

After becoming rather frustrated with playing the same note combination every time I employed arpeggios (i.e. just using the basic arpeggio pattern) I began to explore some different combinations. I soon realised just how powerful they can be if they are played in different note combinations.

Play the exercise below which is illustrated on the first four bars of ‘Autumn Leaves’. I begin with the basic arpeggio pattern ascending, then played descending. Thereafter I use some different arpeggio combinations, but I keep them consistent over each chord.

Listen to how the later combinations sound really melodic against the chord changes, but don’t sound as much like an exercise as the first two patterns.

To work on arpeggio note patterns like these, I employ a simple numbering system.

The root of each arpeggio is numbered 1, the third is 3, the fifth is 5 and the seventh degree is 7. A very simple system to use, just as long as I remember that some chords will have a minor 3rd and others have a b7th etc. I still just call the intervals 1 3 5 7 etc. regardless of chord type. 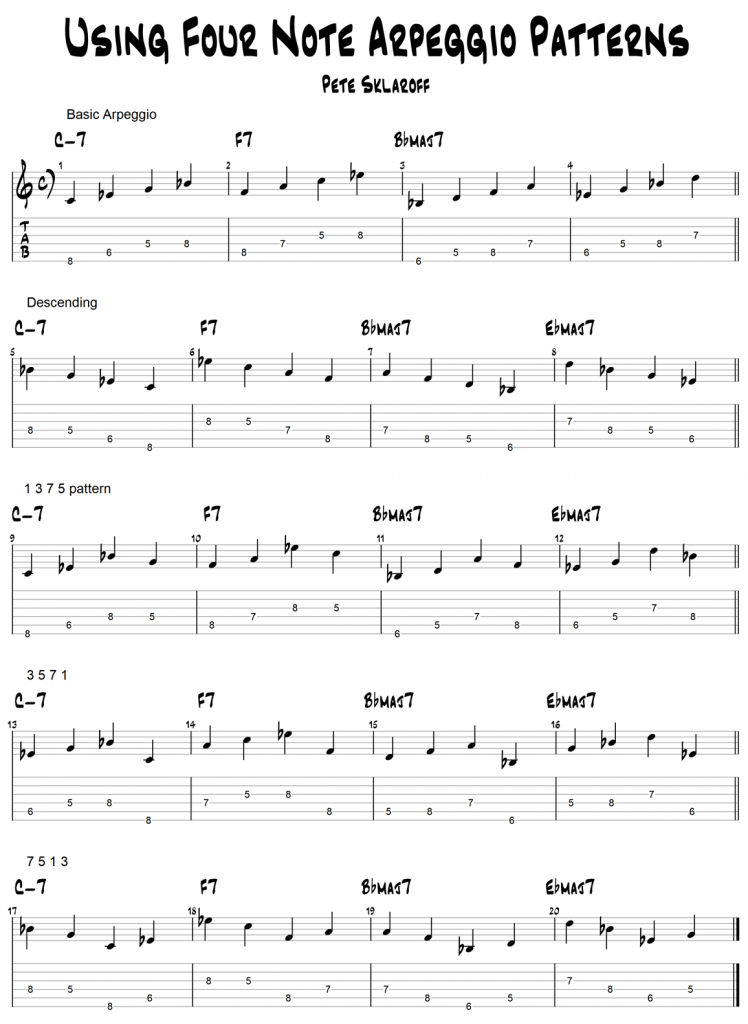 Working on different note combinations such as those illustrated above, can really enhance your soloing and in total there are 24 different combinations possible of the four arpeggio notes, so you have plenty of variations to work with.

At this point, you may be thinking that you should write out all the 24 different note combinations. I recommend not doing this. In my view, writing out all 24 possible combinations of four notes is counter-productive as when I did that at one point i simply ending up reading them and not using my ears.

You need to be able to play these combinations without reference to any written music, so that they become an automatic part of your improvisational vocabulary.

I set about learning these patterns by telling myself that I was going to play for example; 1 7 5 3 on each chord. At first, this was agonisingly slow, as I had to really think carefully about the notes I was playing on each chord, but after a few weeks, things became much faster.

I generally just work on a couple of note combinations at a time until I feel comfortable with them, before moving onto others.

Don’t rush this process! It will take as long as it takes.

OK, that’s it for this lesson. Take your time and learn the combinations thoroughly and slowly. You may be quite amazed at the difference it will make to your playing!