The Study of the Jazz Masters 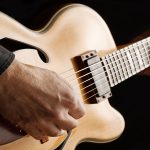 If you are studying jazz music, one of the most valuable exercises you can undertake in learning the language of jazz is to transcribe another musician’s playing. This might be anything from an entire multi-chorus solo, some sample chord voicings for accompaniment, or even just a short one or two bar single-line phrase.

Transcribing jazz solos can really help your musical development as a soloist as it will help your ear training, add to your improvisational vocabulary and also help you further understand jazz rhythm and time-feel.

It seems these days that quite a few players avoid transcribing jazz solos themselves, perhaps because there are now so many transcriptions available on the internet and in instructional books. It might also be that they find the prospect of transcribing just too difficult to contemplate (I did too at first..)

The good news however is that the more you do it, the better you get at it and the faster the process becomes as well. There’s something about the whole process that is really satisfying musically and once you have completed some transcriptions you feel a real sense of achievement.

I recently had to transcribe a lengthy piano solo by the great jazz pianist Herbie Hancock from a live recording made when he was a member of the Miles Davis group in the mid-1960s. This felt like quite a daunting task at first, especially as the tempo was quite fast, it was played over some unfamiliar chord changes, was performed on a completely different instrument to mine and was full of many different rhythmic syncopations and displacements.

In this post, I’d like to outline a little of the process I went through whilst working on the Herbie Hancock solo and some of the lessons I learned.

Firstly, here’s the full piano solo I had to transcribe in its entirety from the original recording. Play it a few times on headphones to really hear all the nuances in Herbie’s amazing playing on this track. Listen out especially for the amazing rhythmic interplay with drummer Tony Williams.

Once you’ve had a good listen to the track, you’ll maybe understand why this transcription seemed rather daunting! Now here’s some thoughts on the transcription process itself.

Lessons learned during the process of transcribing the solo 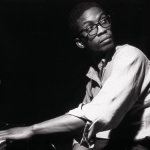 When I first started this transcription, I initially mapped out the chord changes from the original song’s lead sheet, as I knew that Herbie Hancock would likely have substituted some (or many) of the chords. This proved very helpful, as I was able to get an angle on how he was changing the harmony during his performance. After this, I set about transcribing in sections. I normally transcribe about four to eight bars at a time and initially just get the individual notes written down before worrying about the rhythms. I know a lot of other transcribers might disagree with this approach, but it works for me and helps me especially in realising phrase lengths etc.

Once I was fairly confident in the pitches I’d transcribed, I went back over them all and added in the rhythms. As this was a piano solo (and I’m a guitarist) I decided to transcribe the right hand mostly at first, unless the left hand voicings were very obvious.

One of the first things I noticed in this solo was that there was a lot of rhythmic variation and syncopation evident as well as the use of some hemiolas. With many of the rhythms I had to listen to the same section several times to ensure it was correctly notated.

Here’s a sample of some of the right hand passages I transcribed (hence no left hand voicings etc.) 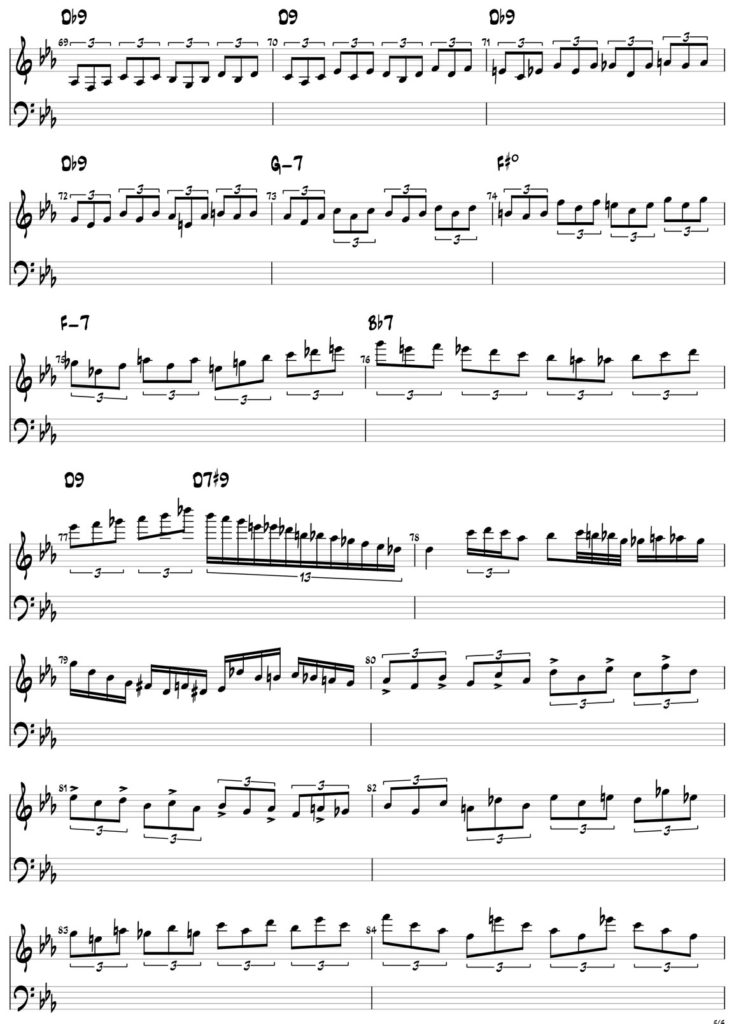 When transcribing jazz solos, I generally try and work at full tempo if I can, but I don’t have super-human ears so I often have to slow faster passages down and I recommend using transcription software for this. My personal preference is the Transcribe program.

This software is very reasonably priced and works really well for transcribing music, especially as it maintains pitch as you slow down the tempo. There are lots of other great features you can utilise within the program as well but I’ll let you check that out for yourself.

Here’s a screen shot of the Transcribe software and a link to the company website if you click on this link: Transcribe Software 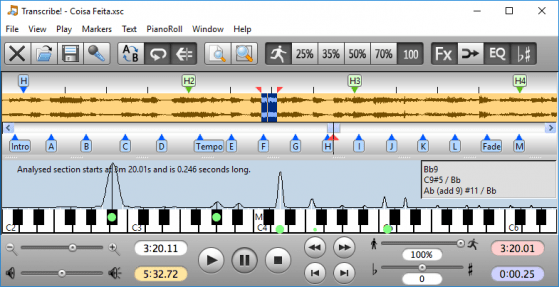 Playing along with the recording

This was probably the hardest aspect of transcribing the solo, as it involved me trying to play along with a jazz piano player (and a master of his art as well) I started by learning short phrases and then playing them slowly to get them under my fingers. Some of the phrases were not easily translated to guitar and I had to make octave adjustments here and there to be able to play along with the track. In other cases I had to practice certain passages a LOT to try and get them up to the required tempo. In some cases this took several days as well.

Here’s the first part of the solo with me playing the solo on guitar alongside the original recording (I’ve panned the guitar slightly to one side so that you can hear it better). It’s not perfect by any means, but the process was very educational and entirely worthwhile for me.

Even though I know it’s not a perfect match to the original recording, I learned a vast amount about how Herbie Hancock phrases and also a lot about time and rhythm as well as how he constructs lines.

I’m just in the process of completing the remainder of the solo and I’ll upload here when it’s complete.  Hopefully this post will maybe inspire you start transcribing jazz solos yourself and see what it can do for your playing.